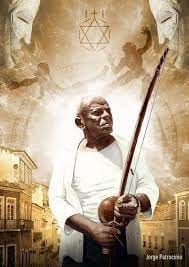 Machado was born in Salvador in the year 1899 but was not officially registered until 1900, resulting in some confusion surrounding his date of birth. Despite his being born in 1899, 1900 is the date most commonly known and published.

The son of Luiz Cândido Machado and Maria Martinha do Bonfim, Manoel was born at the Bairro do Engenho Velho, Salvador. The nickname “Bimba” came up due to a bet between his mother and the midwife during his birth; his mother bet that he was going to be a girl and the midwife bet he would be a boy. After he was delivered, the midwife said… it’s a boy, look at his Bimba’ (male sexual organ).

He started learning capoeira when he was 12 years old, with a Capitão da Companhia Baiana de Navegação (Navigation Captain) from Estrada das Boiadas (present day Bairro da Liberdade) in Salvador, called Bentinho, even though in those days capoeira was still being persecuted by the authorities. He would later be known as one of the legendary founding fathers of contemporary capoeira, the other being Vicente Ferreira Pastinha (“Mestre Pastinha”), the father of modern Capoeira Angola.

Birth of the Regional style

At 18, Bimba felt that capoeira had lost all its efficacy as a martial art and an instrument of resistance, becoming a folkloric activity reduced to nine movements. It was then that Bimba started to restore movements from the old capoeira (later became known as Bimba Angola), added movements from an extinct African fighting style called Batuque – a type of martial art that he learned from his father (of which his father was a champion), as well as introducing movements created by himself. Bimba was the 1st to create a method of teaching to help facilitate learning because until then, capoeira was only learned by watching and participating in the roda. This was the beginning of the development of capoeira regional.

In 1928, a new chapter in the history of capoeira began, as well as a change in the way black people (of African descent, brought to Brazil as slaves) were looked upon by the Brazilian society. After a performance at the palace of Bahia’s Governor, Juracy Magalhães, Bimba was finally successful in convincing the authorities of the cultural value of capoeira, thus in the 1930s ending its official ban, in effect since 1890.

Machado founded the first capoeira school in 1932, the Academia-escola de Cultura Regional, at the Engenho de Brotas in Salvador, Bahia. Previously, capoeira was only practiced and played on the streets. However, capoeira was still heavily discriminated against by upper-class Brazilian society. In order to change the pejorative reputation of capoeira and its practitioners as devious, stealthy and malicious, Bimba set new standards to the art.

His students had to wear a clean, white uniform, show proof of grade proficiency from school, exercise discipline, show good posture and many other standards. As a result, doctors, lawyers, politicians, upper-middle-class people, and women (until then excluded) started to join his school, providing Bimba with legitimacy and support. 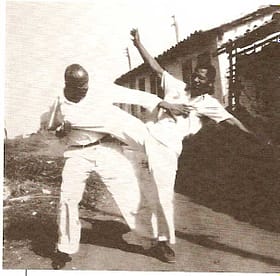 On June 9, 1937, he earned the state board of education certificate. and officially registered the 1st Capoeira center.

In 1942, Machado opened his second school at the Terreiro de Jesus on Rua das Laranjeiras. The school is still open today and was supervised by his former student, “Vermelho” until the early 1980s. The school then came under the brief supervision of Mestre Almiro, before being transferred to Mestre Bamba; the man who leads the school today. He also taught capoeira to the army and at the police academy. He was then considered “the father of modern capoeira”.

July 23, 1953 he was invited to demonstrate capoeira to the then president of Brazil, Getúlio Dorneles Vargas. Vargas says, “Capoeira is the only sport which was truly Brazilian.”

Unhappy with false promises and lack of support from local authorities in Bahia, he moved to Goiânia in 1973 at the invitation of a former student. He died a year later, on February 5, 1974 at the Hospital das Clínicas de Goiânia, due to a stroke.

Bimba managed to recover the original values within capoeira, which were used amongst the black slaves centuries before him. For Bimba, capoeira was a fight but “competition” should be permanently avoided since he believed it was a “cooperation” fight, where the stronger player was always responsible for the weaker player and helped him to excel in his own fighting techniques.

Machado fought all his life for what he strongly believed was best for capoeira and succeeded. After he died in 1974 one of his sons, “Nenel” (Manoel Nascimento Machado), at 14, took over his father’s capoeira legacy. Nenel is still responsible for the remarkable cultural and historical legacy his father left him and is president of Filhos de Bimba School of Capoeira.

Mestre Bimba strongly believed capoeira had an extraordinary value as a self-defense martial art, hence his efforts to develop its learning in a structured and methodical way.

Bimba developed a capoeira teaching method with commandments, principles and traditions, which are still part of the Capoeira Regional up to this day.

Some of his commandments are:

Bimba also established his own capoeira principles as the basis for his capoeira teaching method:

The aspects that still makes Capoeira Regional unique is its method: